The Greatest Passports of The Decade

The Rise of the Freedom Seekers.

This past decade, our planet has witnessed the rise of many new trends and the unfortunate fall of past triumphs. But when it comes to the world of global mobility— positive democracy and increasing value in Passport Power— the 2010s truly left a lasting mark.

According to the Passport Index, the leading global mobility intelligence platform, the greatest passports of the decade are not European, nor are they North American. Passport Index’ unique real-time ranking of the world’s passports reveals quite astonishing trends and results.And although these usual suspects have shuffled at the top of the rankings year after year, it was the least expected that quietly migrated to the top of the charts, making the most of the decade.

Over the last ten years, the Passport Index identified a common trend in island nations surfing slowly higher in the ranks as the fastest-growing passports, African nations swiftly escaping the lowest-ranking bottom, and many countries within the European Union remaining stagnant and comfortable at the top.

The World is Opening up

Contrary to popular perception, in an era of building walls and closing borders, the world has considerably opened up in the past decade.

According to Passport Index’ World Openness Score, “the world has never been more open than today”, shared Armand Arton, Founder and President of Arton Capital.

The current real-time World Openness Score is valued at 21,360. If every single country were to travel freely one to another, the absolute openness score would equate to 39,601, suggesting that 54% of our world is in fact, open in 2019 and keeps growing year after year.

“At an average increase of 4% year-over-year, it would be incredible to assume that by 2035 the entire world be open for travel,” added Arton. 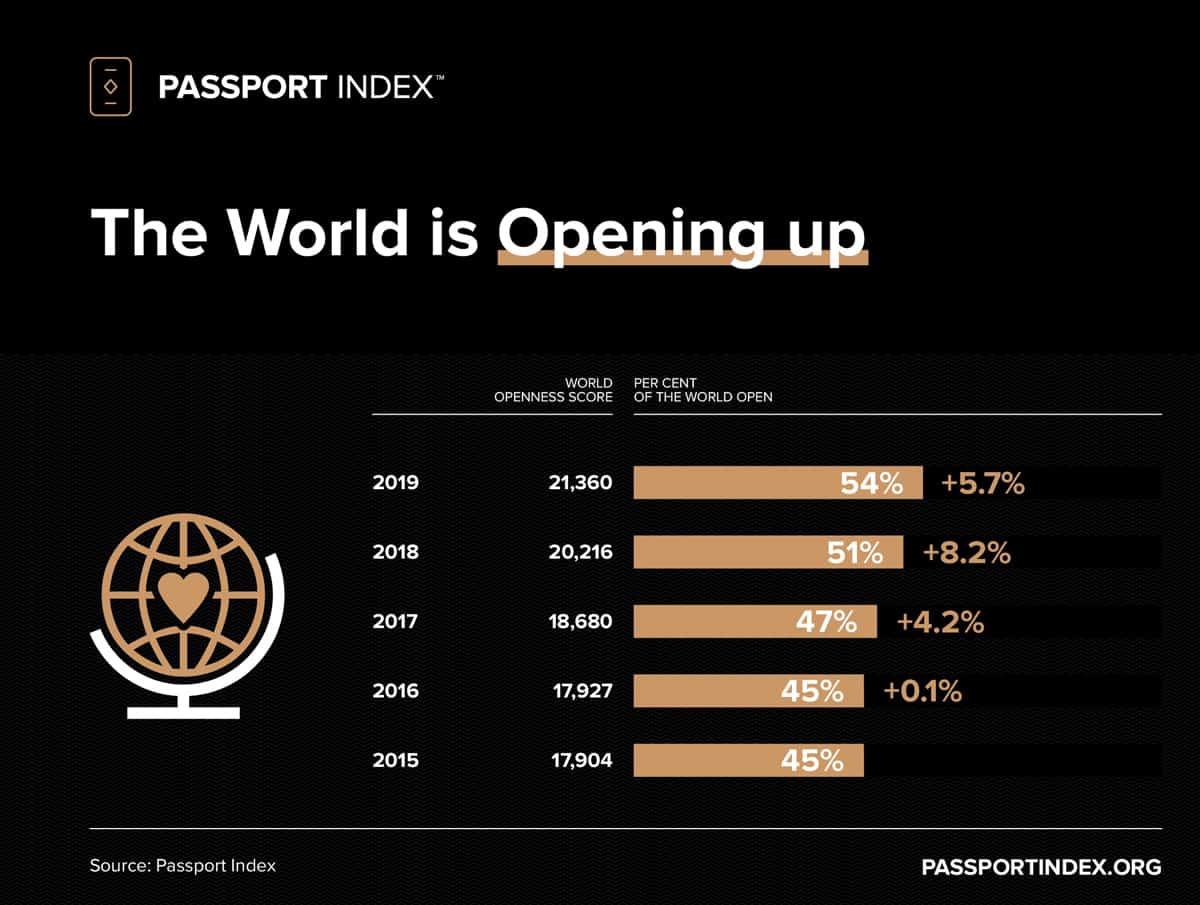 Comfortable at the Top

It comes as no surprise that UK, Denmark, Sweden, Finland, Germany, Luxembourg, France, Italy and the Netherlands have been amongst the Top 5 most powerful passports ranking for the last decade. Over the years, others including Japan and Singapore have joined the pact, however this list of remarkably all European Union nations, are the only ones who have remain strong, consistent, and comfortable at the top.

Unfortunately, being at the very top means there is only one other way to go— down. While in 2010 the UK dominated the highest-ranking list, by 2019 it has dropped down to 5th place, sharing its new rank with Canada and New Zealand as well as five other European nations. After Brexit, the UK will either see its past glory return, or it may fall even lower.

One notable absence is the USA. Under Trump’s Administration, the American passport has received little to no attention. Strengthening the US passport should most certainly have qualified in Trump’s promise to “Make America Great Again” — but alas, increasing the freedom of global mobility for its citizens has been largely ignored under his administration.

The Rise of the Underdogs

Many countries have realized the importance of the power of their passport. With a mission to improve diplomatic relations with the rest of the world and a focus to provide citizens with increased global mobility; the sky is the limit for any country’s passport.
Throughout this decade, the following underdogs became a testament to the power of breaking down walls and borders as barriers, and seeing them as gateways to growth, freedom, and opportunity.

Kicking off the Top 10 Greatest Passports of the Decade is the South Pacific island nation of Vanuatu in 10th place, showing a remarkable 70% increase in its passport power after gaining 53 visa waivers.

Another Southeast Asian island nation, Timor Leste comes next in 9th place with an impressive +55 visa waivers, jumping up from 86th position on the Global rankings, to 48th place.
Closely behind, and once again in the Pacific, Micronesia takes 8th place with a 116 Mobility Score (MS) after gaining 57 visa waivers.

Palau and the Marshall Islands share the 7th position, both scoring a remarkable +58 visa waivers in the past ten years.

Championing in 6th place with a nearly 110% increase in ranking after gaining 63 visa waivers, is another ambitious duo, Moldova and Georgia — two former Soviet republics in Eastern Europe.

With an additional 65 visa-free and visa-on-arrival destinations for its citizens, Albania takes 4th place, increasing 131% from its original score back in 2010.

Ukraine’s passport takes 3rd place, jumping +69 and scoring a grand 141 MS in 2019.
Despite political turmoil in the last few months, Taiwan, the Republic of China (ROC) exceptionally displays a 143% increase in ranking, taking 2nd place with +79 visa waivers between 2010 and 2019!

And stealing the spotlight in 1st place with an outstanding 161% increase in its passport power between 2010 and 2019, is the Unicorn of the Decade. 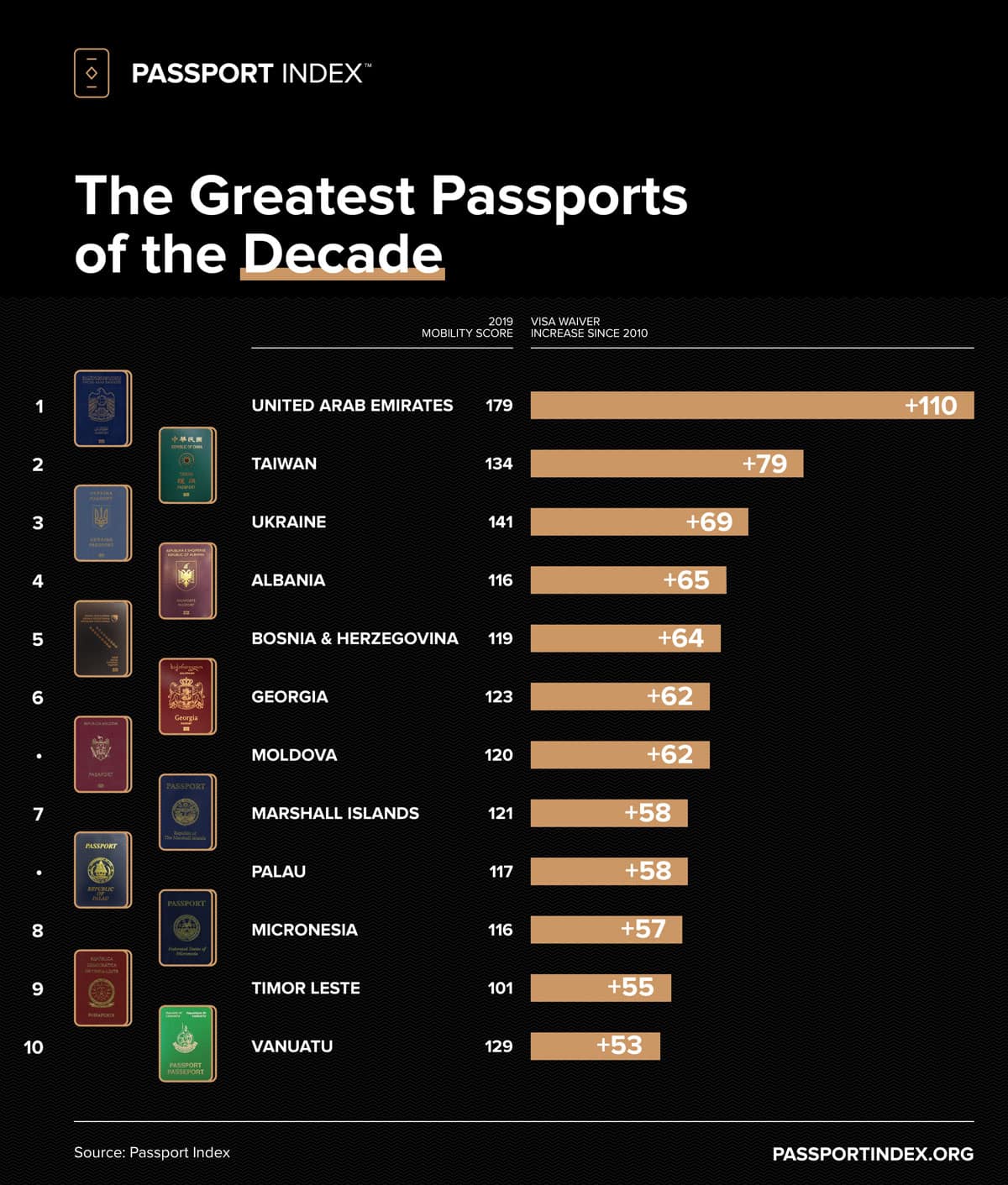 At the top of the rank as the world’s Greatest Passport of the Decade is the United Arab Emirates, gaining a total of +111 visa waivers, most of which have taken place in the last 3 years with an outstanding 161% increase in passport power and shining in 1st place with a record-breaking 179 Mobility Score.

Since the inception of the Passport Force Initiative in 2017, the Passport Index closely followed and documented the progress of the UAE passport. As their goal to rise within the Top 5 was achieved three years ahead of time, their momentum and mission grew stronger as they strived to reach 1st place before the end of 2018.

Triumphing and maintaining the lead for over a year to date, the UAE’s meteoric rise became one of the most intriguing examples of a successfully accomplished national goal. 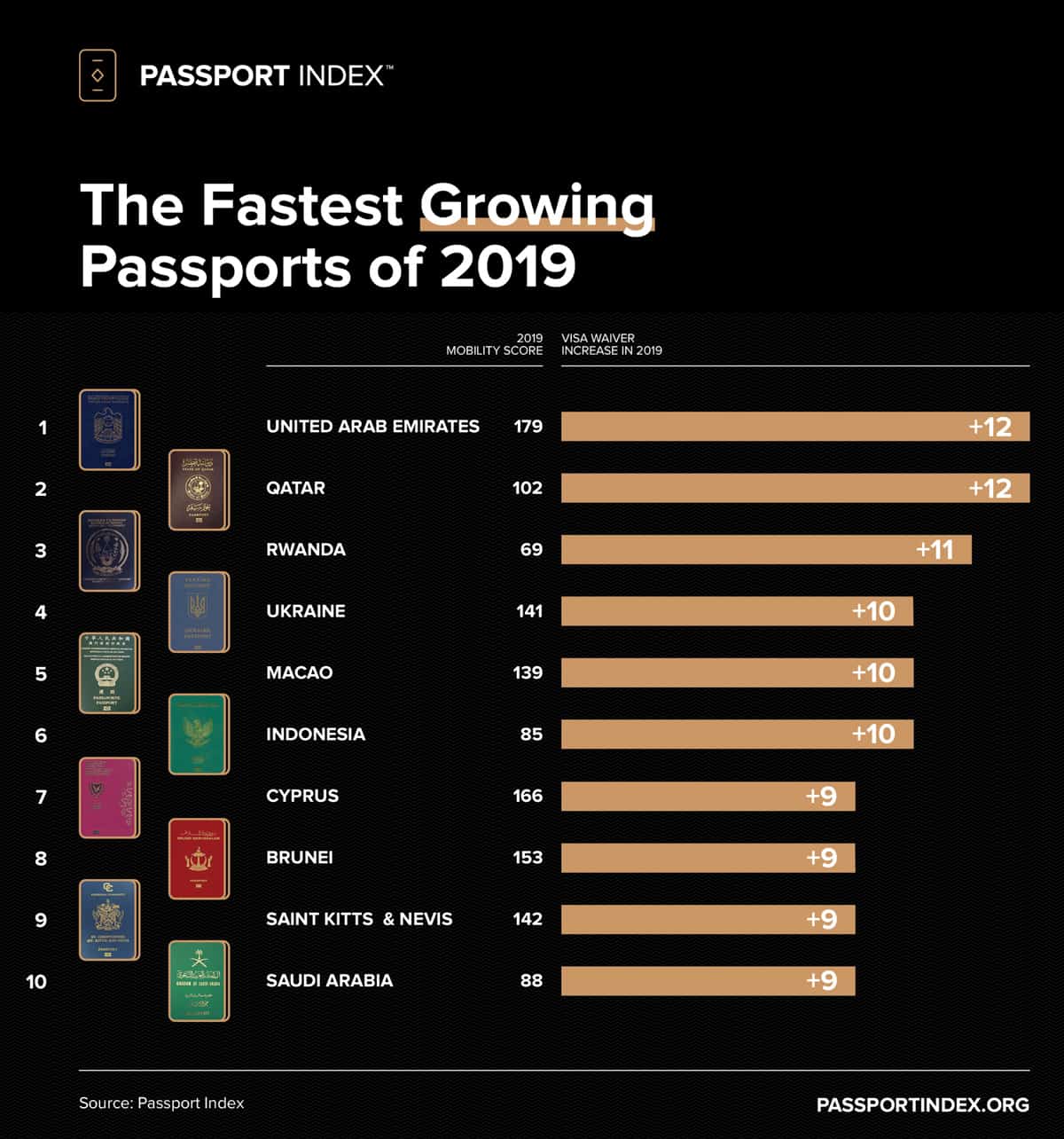 On their Way Upwards

The ideal direction for any nation’s passport is up, but these two countries have displayed their will to strive higher unlike any other. Both Angola and China were two of the lowest placed countries ten years ago that made substantial leap forward to date. In 2010, Angola held a 42 Mobility Score that jumped to 61 by 2019, while China gained astonishing +37 points to reach a Mobility Score of 80 today.

One of the most fascinating discoveries of the decade is witnessing the rise of the fallen in low-ranking African countries who have not only shown improvement in their ranks but have managed to escape the Bottom 10 over the past decade; including Angola, Burundi, Comoros Islands, Djibouti, and Equatorial Guinea.

Fell to the Bottom

The war in Syria has forced it down to 3rd place as the world’s weakest passport. In 2010 Syria was not even on the bottom 10 list. This is an important piece of information that relays the correlation between the economic and political state of a country and the power of its passport, and can be seen once again with Yemen, the Palestinian Territories, and Libya to round up the bottom 10 list.

Stuck at the Bottom

At the bottom — the differences are shocking. Evaluating the world’s weakest passports did not seem like a chore at first; mostly war-inflicted and underdeveloped countries make up the countries at the lowest end of the ranking. But once we look closely at the differences at the begging and the end of this decade, the political state of our world is unveiled.
Both Afghanistan and Iraq have remained the weakest ranking passport for the last ten years, with ongoing conflict tracing back to early 2000s, as well as countries long facing unrest, including Iran and North Korea. Shifting minutely year after year, the following low-ranking countries have been stuck at the bottom of the list, providing their citizens access to less than 20% of our world. 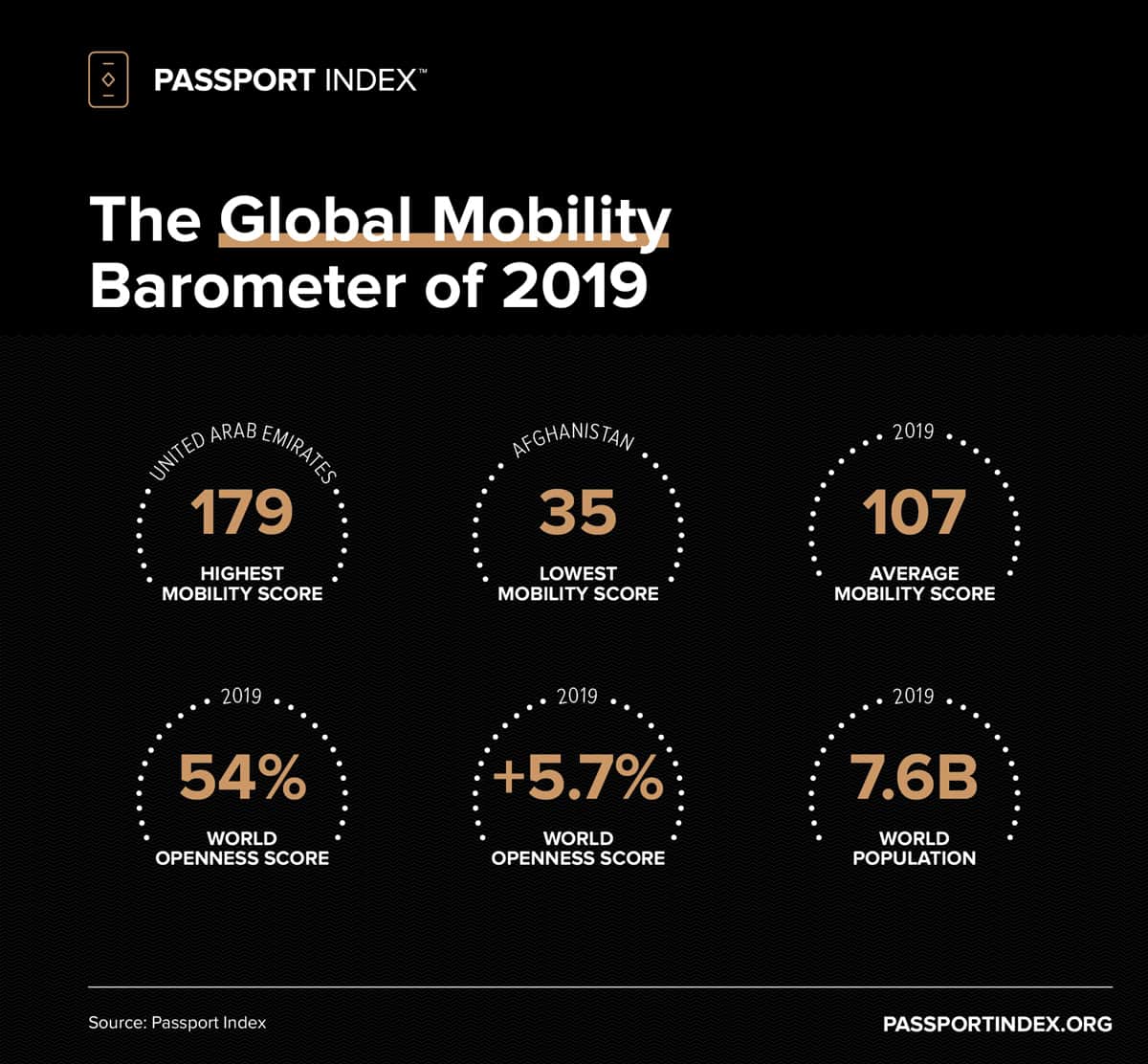 This past year inspired much progress and surprising growth amongst nations adopting a global vision. The UAE preserved its global lead, adding another 12 countries to its ever-growing mobility score.

In the meantime, Qatar also gained +12 visa waivers throughout 2019, making its way up the ranks with Rwanda closely behind with +11. Ukraine, Macao, and Indonesia all added +10 to their passport power, and Brunei ended the year with +9 visa waivers.
Another country amongst the list of The Fastest-Growing Passports of 2019, is Saudi Arabia which appears with +9 visa waivers, suggesting that the leading passport may have inspired some successors.

Saudi Arabia announced its bold vision to grow and diversify their economy and position the country to play a leading role in global development with the launch of NEOM, a new city for innovation and human progress. It comes as no surprise that strengthening global relations and improving passport power is an imperative tool to accomplish this national goal by 2030.

This year also displayed an increase of passport power with nations offering Citizenship-by-Investment Programs (CBI). One of the strongest benefits CBIs offer investors and their families is granting them the freedom of global mobility, showing beyond doubt, that the value of having a strong passport in hand has truly become a global trend.

Cyprus and St. Kitts and Nevis are amongst the ones who made the biggest leap forward, gaining +9 visa waivers in 2019.

The boost in passport power has also benefited Malta (+8), Antigua & Barbuda, Bulgaria, Montenegro and Portugal (+7), as well as Dominica and Saint Lucia (+6). Grenada came last but nevertheless showed improvement with (+4). See a full list of passport ranking of CBI countries. 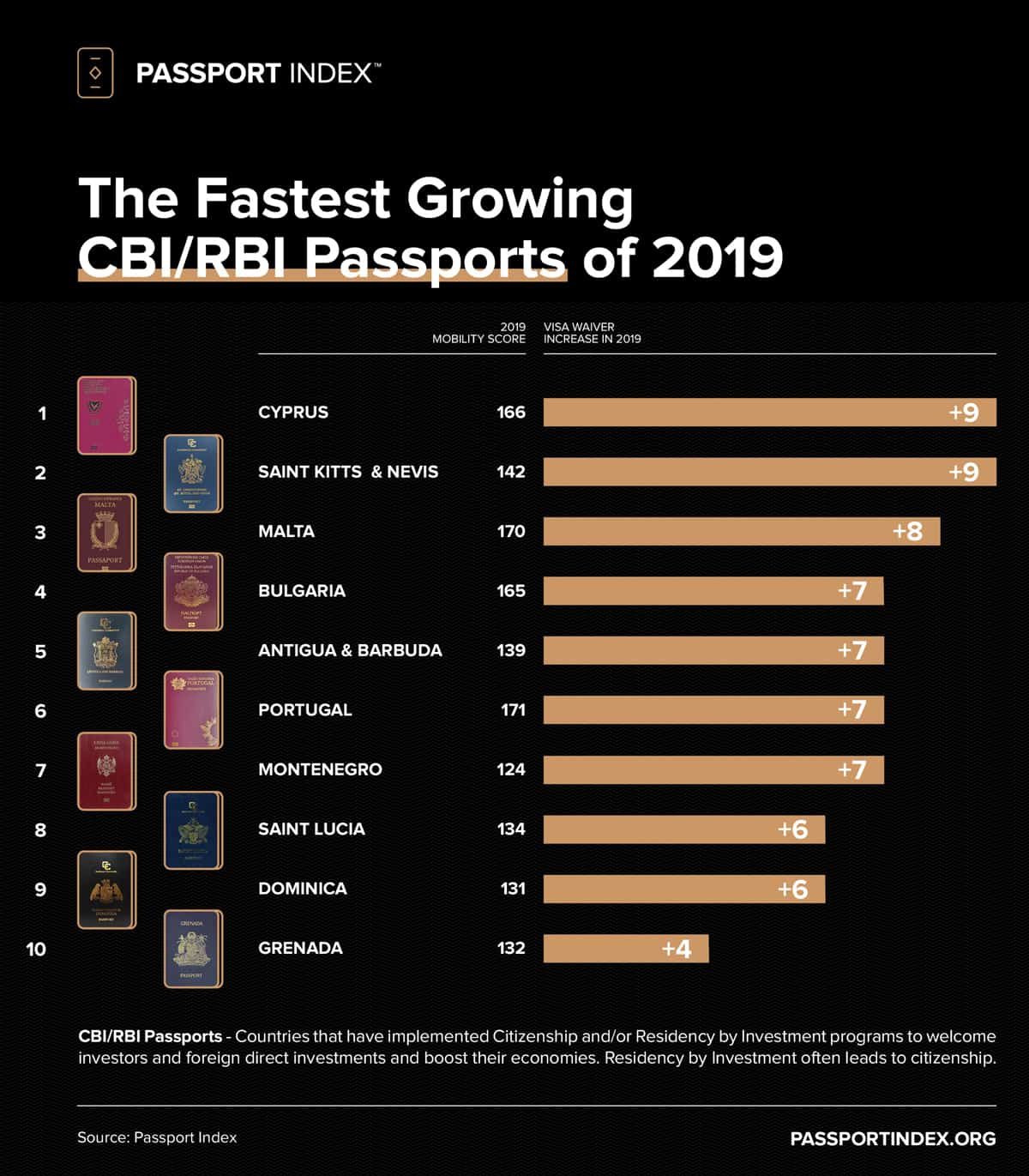 If this decade taught us one thing; it’s that access and freedom are vital catalysts to evolution and progress. There is only one way to unparalleled benefits and opportunities for a brighter future, both for a nation and its citizens, and that is enforcing the importance and power of an increased global mobility.

A Demand for Extraordinary Measures

A Demand for Extraordinary Measures

USA Closes its Borders to Nigeria

USA Closes its Borders to Nigeria

Enquiries for second citizenship by Nigerians more than double. The Trump Administration’s US travel 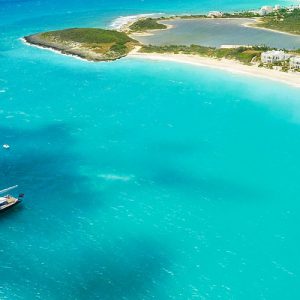 Anguilla Launches Not One, But Two Residency-by-Investment Programs

Anguilla Launches Not One, But Two Residency-by-Investment Programs

Select Anguilla, a new government agency to administer the programs. Anguilla is the latest country

Press releases
Do you receive our monthly Global Citizen Newswire?